The Fundamental Orders of 1639

Return to the main page of #HistoryHub.

In 1639, the English colony of Connecticut adopted a set of laws governing the establishment, powers, and limitations of government. Some historians consider this document, which would become known as The Fundamental Orders, to be the first written Constitution in Western History. Today, Connecticut is often called The Constitution State due to this claim. 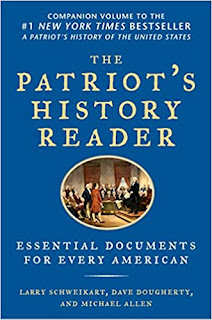 Ad:  The Patriot's History Reader: Essential Documents for Every American - Perhaps no subject has been so badly distorted to fit modern political and social agendas than has History. And perhaps no other subject will be more important in restoring our Republic, and in saving Western Civilization. But how do we relearn History without the distortions? One step is to read the original sources of History for ourselves. The Patriot's History Reader presents these original sources - the documents, speeches, and legal decisions - that shaped our country into what it is today.
The authors explore both oft-cited documents-the Declaration of Independence, Emancipation Proclamation, and Roe v. Wade--as well as those that are less famous. Among these are George Washington's letter to Alexander Hamilton, which essentially outline America's military strategy for the next 150 years, and Herbert Hoover's speech on business ethics, which examines the government's role in regulating private enterprise.
By helping readers explore history at its source, this book sheds new light on the principles and personalities that have made America great.
----------------
!!!!! Censorship by Big Tech, Corporate Media, and social "justice" nutjobs threatens the Free Speech, Freedom of Religion, and other Rights that are so important to most of us. Fight back.  Don't let Big Tech squash independent sites like this one! Please bookmark my websites and visit them often. Share links and articles with your family and friends. Follow me on social media to stay in touch.
Websites
www.TimGamble.com - News and Information
www.DystopianSurvival.com - Modern Survival
Video Channels (Please subscribe - new videos start soon)
Bit Chute: https://www.bitchute.com/channel/ZObr3xTiK813/
Rumble: https://rumble.com/user/TimGamble
Odysee: https://odysee.com/@timgamble:e
Social Media
GAB: https://gab.com/TimGamble
Spreely:  https://www.spreely.com/TimGamble
USA.Life: https://usa.life/TimGamble
Minds: https://www.minds.com/TimGamble/
Posted by Tim Gamble

Email ThisBlogThis!Share to TwitterShare to FacebookShare to Pinterest
Labels: History