09/27/2020 Nigeria (International Christian Concern) – Despite a strict law forbidding the movement of cattle through land in Benue state, there has still been ongoing attacks by Fulani militants. In November 2017, the Anti-Open Grazing bill went into effect, making it illegal for herders to move their cattle through unowned land. They were required to buy or rent pastures and ranches on which to graze their cattle. This was in hopes of ending the many violent attacks that take place against the mainly Christian farmers of the state.

Yet, on Sunday, September 20, Fulani militants attacked Tse-Apera village, Nzorov District, Guma LGA. This village is home to the governor of Benue State, Samuel Ortom, who helped get the bill passed into law. He has also been one of the most outspoken critics of the attacks throughout Nigeria by Fulani militants. During this attack, five people were killed, including one reported beheading. Another eight people were injured and sent to the hospital for recovery. According to the head of the village, the attackers were heard speaking the Fula language, which is how they were identified as Fulani.

This attack is just one of many that have claimed the lives of thousands of Christians in the past decade. The widespread attacks have been classified by some as normal historical conflicts over land rights, while others claim that these attacks constitute pure jihad amounting to genocide. No matter where on this scale the attacks fall, they are atrocious, wrong, and the government in Nigeria must do more to end this continuing issue. Please continue to pray for our brothers and sisters in Nigeria who suffer daily for their faith.

9-26-2020 - Here are the survival rates for Covid-19 in the United States, broken down by age group. These numbers are from the Centers for Disease Control (CDC). You can get more information from the CDC website (https://www.cdc.gov/coronavirus/2019-ncov/) and the official Coronavirus website (https://www.coronavirus.gov/).  Please note that with a population base of 330 million people, even tiny percentages of people dying quickly add up to a large number of actual deaths.

Covid-19 Survival Rates by Age (according to the CDC)

According to Christian persecution watchdog Bitter Winter, “Residents in the neighborhood recounted that two days before the raid, four plainclothes police officers were seen outside the venue. According to a young man from the area, officers were spotted at 4 a.m. on the day of the raid.”

Since the raid, police have released a few church members, but not Sola Fide’s pastor. For those released, police still surveil their movements through fingerprint tracking, video surveillance, and plain-clothed police officers following them. Two other churches experienced similar harassment in the months that followed.

09/21/2020 Turkey (International Christian Concern) – A 15-meter high cross erected over the weekend in Greece’s Holy Monastery of Agia Skepi is visible in Turkey’s city of Edirne. Turkish President Erdoğan is anticipated to raise this as an issue while meeting German Chancellor Angela Merkel this week. Greece and Turkey are currently entangled in a Mediterranean conflict which has heavily involved both NATO and EU member-states.

On the one hand, it is common for religion to become weaponized in conflicts between these two nations. Greece is primarily orthodox Christian, and many Greeks are descended from those who experienced the forced population exchange with Turkey and the Turkish genocide perpetuated against Christian ethnic minorities. Turkey has never acknowledged these wrongs, and is increasingly leaning towards Islamism.

Erdoğan’s reaction to the establishment of a cross within Greek territory sets the foundation for increased religious persecution within Turkey. He is growing hostility towards Christian symbols. Christianity is already greatly struggling to exist within Turkey, and this kind of hostility reinforces the idea that Christianity is not welcome within its borders.

09/08/2020 Washington D.C. (International Christian Concern) – International Christian Concern (ICC) has learned that Asif Pervaiz, a 37-year-old Pakistani Christian, has been sentenced to death for allegedly sending blasphemous text messages in 2013. According to Pervaiz’s attorney, the death sentence was announced by the court despite there being “no evidence” to implicate his client in the case.

Earlier today, Saif-ul-Malook, the attorney representing Pervaiz in court, tweeted that his client had been sentenced to death under Pakistan’s blasphemy laws. “Asif Pervaiz sentenced to death by trial court at Lahore for committing blasphemy although there was no such evidence,” Malook’s tweet read.

The court’s decision comes almost seven years after the initial blasphemy accusation was made against Pervaiz by a Muslim co-worker in October 2013.

On October 2, 2013, a Muslim named Saeed Ahmeed Khokar accused Pervaiz of sending him blasphemous text messages from his mobile phone. Blasphemy charges under Sections 295-A, 295-B, and 295-C of Pakistan’s Penal Code were registered against Pervaiz at the Green Town Police Station in Lahore.

When Pervaiz became aware of the charges, he went into hiding. On October 9, after a week of searching for Pervaiz, police arrested several of Pervaiz’s relatives, including two brothers-in-law and his mother, Naseem Akhtar. According to Akhtar, police told her that they would kill Pervaiz when they found him unless she helped them locate her son.

Akhtar led the police to the home of Waseem Anwar, Pervaiz’s brother. There, police beat Waseem until he confessed to knowing where Pervaiz was hidden. On October 10, 2013, Pervaiz was arrested by police in Sahiwal.

According to Pervaiz’s family, Pervaiz and Khokar were co-workers at a garment factory named Shami Textile, located in the Youhanabad neighborhood of Lahore. At work, Khokar often pressured Pervaiz to convert to Islam, which Pervaiz refused. Prior to October 2, Pervaiz reportedly lost his mobile phone’s SIM card and did not request the company to deactivate it. According to Pervaiz’s family, Khokar used the lost SIM card to send the blasphemous text messages he used to register the false accusation against Pervaiz.

Since Pakistan added Section 295-B and 295-C to the country’s blasphemy laws in 1987, the number of blasphemy accusations has skyrocketed. Between 1987 and 2017, 1,534 individuals in Pakistan have been accused of blasphemy. Out of that 1,534, 829 accusations (54%) were made against religious minorities. With Christians only making up 1.6% of Pakistan’s total population, the 238 accusations (15.5%) made against Christians are highly disproportionate.

ICC’s Regional Manager, William Stark, said, “We here at International Christian Concern are saddened by the court’s decision to sentence Asif Pervaiz to death under the blasphemy laws. We are especially concerned that the death sentence was made with reportedly no evidence being presented to support the blasphemy allegation against Asif. The abuse of Pakistan’s blasphemy laws must be curbed and false allegations must be rooted out and punished. Too often these laws have been a tool in the hands of extremists seeking to stir up religiously motivated violence against minority communities. Without real reform, religious minorities, including Christians, will face more false blasphemy accusations and the extreme violence that often accompanies these accusations.” 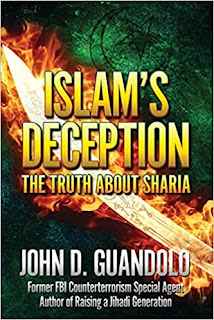 Ad -  Islam's Deception: The Truth About Sharia, by former FBI Counterterrorism Special Agent John D. Guandolo.  How much do you know about the Islamic laws that govern Muslims and Muslim countries?

Islam defines itself as a "complete system of life”—social, cultural, military, political, and religious—governed by sharia (Islamic Law). Following sharia is what it means to be a Muslim. Submitting to Islam means submitting to Allah’s divine law—sharia.

There is no such thing as a “version” of sharia that does not require jihad until the entire planet is under Islamic Law (sharia). That is why Muslim instructors teach it to Muslim children in Muslim schools all over the United States, Canada, Mexico, Europe, Asia, the Middle East and the rest of the planet. There are disastrous consequences when Presidents and national security professionals do not know this.

A major part of the enemy’s strategic plan is to get America’s leaders to frame the “terrorist threat” without referencing Islam and the doctrine upon which they rely—sharia. Why do they want to hide this? Reading through this book, you will understand the true nature of the laws that Muslim follow and knowing this will completely change how you look at the war we’ve been fighting against those who are commanded to subjugate us.