Last week a neighbor committed suicide. He left behind a wife, grown children, and young grandchildren.

Earlier this week, I had the privilege of talking to a veteran who serves on the honor guard at military funerals. He told me about the number of funerals he has served at this year and how many of those were suicides. It was a shocking number.

There is definitely a suicide epidemic happening now.  So, I would like to take a moment to address the issue. If you are having suicidal thoughts, please ask for and get help. If you know someone who may be having suicidal thoughts, or who may be suffering from depression, PTSD, or other mental illness, please say something to encourage them to seek help. There are no easy answers, but silence is always the wrong answer.

Where to Get Help*

❗ SAMHSA Treatment Referral Helpline – 1-877-726-4727  (Get general information on mental health and locate mental health & treatment services in your area. Speak to a live person, Monday through Friday from 8 a.m. to 8 p.m. EST.)

❗ Refer to the article Finding Help: When to Get It and Where to Go on the Mental Health America website.

❗ Local clergy (pastors, priests, rabbis) often will be able to refer you to local programs, support groups, and counselors that can help. 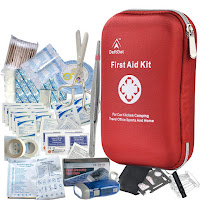 The Thucydides Trap and the War With China

The current trade war with China is only a prelude to what is coming. China is preparing for what it considers an inevitable "hot" war with America within the next 10 years. China is convinced this war must happen because of a concept known as the Thucydides Trap.

The Thucydides Trap isn't some conspiracy theory twaddle, but is a well-studied historical concept heavily discussed in academic and diplomatic circles. Very simply, the Thucydides Trap states that when a rising great power (China, in this instance) threatens to displace an existing great power (in this case, America), a war that will almost certainly lead to the destruction of one of the great powers is almost always inevitable.

The Chinese are very aware of this concept, and are actively making policy based on it. Again, this is known and discussed within diplomatic circles (i.e. cannot be dismissed as a conspiracy theory, but rather is known fact). It is the basis of their ongoing massive military build-up, as well as their interference in North Korea (the Chinese have always assisted North Korea with their nuclear and missile programs, and are pushing Kim Jong-un to stall in regards to denuclearization). It is also part of the reasoning behind their aggressiveness in the South China Sea (control over vital trade routes), including their building of artificial islands & military bases, as well as their economic & diplomatic push into South America and Africa (the later which includes a growing military presence), to obtain various resources.

Take a look at a few recent headlines during the past week alone:


When Will This War Happen?

An honest answer: I don't know. What I do know is that China is preparing for a hot war with the United States. I assume they are waiting for the right moment to strike, a moment when they feel ready and believe the US is at its weakest. I suspect they will wait to see what happens in the 2020 election (notice the last headline posted above is about China already meddling in support of the Democrats in the 2020 elections).

I also know that we need to start preparing, as a nation and as individuals, for the coming war with China. History says it is almost certainly inevitable. The clock is ticking.
--------------

How to Survive the End of the World as We Know It: Tactics, Techniques, and Technologies for Uncertain Times, by James Wesley, Rawles.  Rawles is a well-known name within the survivalist community, and this book gives coverage of most topics within survivalism and prepping, not just food storage and bugging out.

Email ThisBlogThis!Share to TwitterShare to FacebookShare to Pinterest
Labels: China

The genocide against Christians in Nigeria by Muslim militants continues. Over the last 18 years, an estimated 50,000 to 70,000 Christians have been murdered by Muslim groups, while another 2 million people have been displaced." Countless others have been injured. And the genocide is only increasing. The following unedited press release by International Christian Concern details the most recent violence.

08/07/2019 Washington, D.C. (International Christian Concern) – International Christian Concern (ICC) has learned that on Thursday evening, August 1, 2019, Fulani militants ambushed and shot three young men, all members of the Baptist church in Ancha village of Miango District in Nigeria’s Plateau State. The three men were serving as part of the community volunteer watch. Thankfully, all three survived; however, they all suffered gunshot wounds and had to be admitted to the local hospital.

The three survivors, Akore Joseph (19), Nuhu Ishaya (21), and Achi Danjuma (22) shared their story with ICC. Akore began, “We had gone on patrol earlier [that day], and had left my mobile phone battery to be recharged in the next village. So I asked my friends to come with me to go and get it.  On our way back from picking it up, we were walking and talking [when]… all of a sudden, sporadic gunshots erupted from the corn farms. I turned to flee. It was as I fled that a bullet hit me.” Akore was shot in his right shoulder. After fleeing, the three men hid from their attackers until they felt it was safe.

Corroborating the incident, Nuhu Ishaya said, “We tried to hide as secure as we could.  They searched for a while, but didn’t locate us so they went away. We were bleeding. We eventually ran to the nearest village and told the villagers what happened to us.” Nuhu was shot twice, once on the left wrist and also on his upper thigh.

Achi Danjuma, the third survivor, recalled that they had been talking about a previous attack that took place in the village of Hukke, which they were returning from. As they discussed it, they were then attacked themselves. He explained, “The militants recently killed some boys at Hukke village.  It was the memory of that attack that came upon us and we became uneasy and talked about it along the way.” A bullet struck Achi on his right arm.

Pastor of the local Baptist church, Rev. Nanchwat Laven, lamented about the toll that the attacks have taken on his congregation. Yet, he continues to look up to God to intervene and bring them relief and peace. He said that after he learned about the attack, he called Nuhu Ishaya’s cellphone. Someone else answered and eventually told the pastor that he was Fulani, and that they were attacking the Irigwe (the major tribe in Miango), because they are proving “stubborn” by not letting the Fulanis’ cattle graze freely.

Nathan Johnson, ICC’s Regional Manager for Africa, said, “This attack is deeply concerning. Ancha village is a small community that has suffered on numerous occasions. They lost 20 lives during an attack in 2017 and have suffered several other smaller attacks since. I have personally prayed over the mass graves in Ancha that these attacks have created. The Nigerian government must intervene, protect their citizens, and prosecute those who are killing wantonly.”
----------------