On May 29, 2020, President Donald Trump gave a sppech on US relations with China. This sppech was made in response to China's introducing a new national security law for Hong Kong, eroding Hong Kong's special status as autonymous from mainland China.
Full Text of President Trump's May 29, 2020 Speech on China
Thank you very much. Good afternoon. Thank you. I’m here today to talk about our relationship with China and several new measures to protect American security and prosperity.

China’s pattern of misconduct is well known. For decades, they have ripped off the United States like no one has ever done before. Hundreds of billions of dollars a year were lost dealing with China, especially over the years during the prior administration. China raided our factories, offshored our jobs, gutted our industries, stole our intellectual property, and violated their commitments under the World Trade Organization. To make matters worse, they are considered a developing nation getting all sorts of benefits that others, including the United States, are not entitled to.

But I never solely blamed China for this. They were able to get away with a theft like no one was able to get away with before because of past politicians and, frankly, past presidents. But unlike those who came before, my administration negotiated and fought for what was right. It’s called: fair and reciprocal treatment.

China has also unlawfully claimed territory in the Pacific Ocean, threatening freedom of navigation and international trade. And they broke their word to the world on ensuring the autonomy of Hong Kong.

The United States wants an open and constructive relationship with China, but achieving that relationship requires us to vigorously defend our national interests. The Chinese government has continually violated its promises to us and so many other nations.

These plain facts cannot be overlooked or swept aside. The world is now suffering as a result of the malfeasance of the Chinese government. China’s cover-up of the Wuhan virus allowed the disease to spread all over the world, instigating a global pandemic that has cost more than 100,000 American lives and over a million lives worldwide.

Countless lives have been taken, and profound economic hardship has been inflicted all around the globe. They strongly recommended against me doing the early ban from China, but I did it anyway and was proven to be 100 percent correct.

China has total control over the World Health Organization, despite only paying $40 million per year compared to what the United States has been paying, which is approximately $450 million a year.

We have detailed the reforms that it must make and engage with them directly, but they have refused to act. Because they have failed to make the requested and greatly needed reforms, we will be today terminating our relationship with the World Health Organization and redirecting those funds to other worldwide and deserving, urgent, global public health needs.

The world needs answers from China on the virus. We must have transparency. Why is it that China shut off infected people from Wuhan to all other parts of China? It went nowhere else. It didn’t go to Beijing; it went nowhere else. But allowed them to freely travel throughout the world, including Europe and the United States.

The death and destruction caused by this is incalculable. We must have answers not only for us but for the rest of the world.

This pandemic has underscored the crucial importance of building up America’s economic independence, reshoring our critical supply chains and protecting America’s scientific and technological advances.

For years, the government of China has conducted illicit espionage to steal our industrial secrets, of which there are many. Today, I will issue a proclamation to better secure our nation’s vital university research and to suspend the entry of certain foreign nationals from China who we have identified as potential security risks.

I am also taking action to protect the integrity of America’s financial system — by far, the best in the world. I am instructing my Presidential Working Group on Financial Markets to study the differing practices of Chinese companies listed on the U.S. financial markets, with the goal of protecting American investors.

Investment firms should not be subjecting their clients to the hidden and undue risks associated with financing Chinese companies that do not play by the same rules. Americans are entitled to fairness and transparency.

Several of the most significant actions we’re taking pertain to the deeply troubling situations unfolding in Hong Kong.

This week, China unilaterally imposed control over Hong Kong security. This was a plain violation of Beijing’s treaty obligations with the United Kingdom in the Declaration of 1984 and explicit provisions of Hong Kong’s Basic Law. It has 27 years to go.

The Chinese government’s move against Hong Kong is the latest in a series of measures that are diminishing the city’s longstanding and very proud status.

This is a tragedy for the people of Hong Kong, the people of China, and indeed the people of the world. China claims it is protecting national security. But the truth is that Hong Kong was secure and prosperous as a free society. Beijing’s decision reverses all of that. It extends the reach of China’s invasive state security apparatus into what was formerly a bastion of liberty.

China’s latest incursion, along with other recent developments that degraded the territory’s freedoms, makes clear that Hong Kong is no longer sufficiently autonomous to warrant the special treatment that we have afforded the territory since the handover.

Therefore, I am directing my administration to begin the process of eliminating policy exemptions that give Hong Kong different and special treatment.

My announcement today will affect the full range of agreements we have with Hong Kong, from our extradition treaty to our export controls on dual-use technologies and more, with few exceptions.

We will be revising the State Department’s travel advisory for Hong Kong to reflect the increased danger of surveillance and punishment by the Chinese state security apparatus.

We will take action to revoke Hong Kong’s preferential treatment as a separate customs and travel territory from the rest of China.

More than two decades ago, on a rainy night in 1997, British soldiers lowered the Union Flag, and Chinese soldiers raised the Chinese flag in Hong Kong. The people of Hong Kong felt simultaneously proud of their Chinese heritage and their unique Hong Kong identity. The people of Hong Kong hoped that in the years and decades to come, China would increasingly come to resemble its most radiant and dynamic city. The rest of the world was electrified by a sense of optimism that Hong Kong was a glimpse into China’s future — not that Hong Kong would grow into a reflection of China’s past.

In every decision, I will continue to proudly defend and protect the workers, families, and citizens of the United States of America.

Thank you very much. Thank you.
-----------------
Ad:  Stealth War: How China Took Over While America's Elite Slept, by Brigadier General Robert Spalding (US Air Force, Retired), reveals the shocking success China has had infiltrating American institutions and compromising our national security. 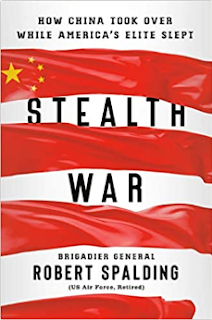 The media often suggest that Russia poses the greatest threat to America's national security, but the real danger lies farther east. While those in power have been distracted and disorderly, China has waged a six-front war on America's economy, military, diplomacy, technology, education, and infrastructure--and they're winning. It's almost too late to undo the shocking, though nearly invisible, victories of the Chinese.

In Stealth War, retired Air Force Brigadier General Robert Spalding reveals China's motives and secret attacks on the West. Chronicling how our leaders have failed to protect us over recent decades, he provides shocking evidence of some of China's most brilliant ploys, including:

• Placing Confucius Institutes in universities across the United States that serve to monitor and control Chinese students on campus and spread communist narratives to unsuspecting American students.

• Signing a thirty-year agreement with the US that allows China to share peaceful nuclear technology, ensuring that they have access to American nuclear know-how.

Spalding's concern isn't merely that America could lose its position on the world stage. More urgently, the Chinese Communist Party has a fundamental loathing of the legal protections America grants its people and seeks to create a world without those rights.

Despite all the damage done so far, Spalding shows how it's still possible for the U.S. and the rest of the free world to combat--and win--China's stealth war.
Posted by Tim Gamble No comments:

The following is an unedited press release from International Christian Concern (ICC). You can visit their website at https://www.persecution.org/ for more on Christian persecution around the world.

06/05/2020 Washington D.C. (International Christian Concern) – International Christian Concern (ICC) has learned that Fulani militants again attacked the Adara natives in Kajuru LGA, Kaduna State, Nigeria. The attack on the Christian village took place while many were still mourning the loss of loved ones, property, and their means of livelihood following a series of coordinated attacks on at least five villages and 12 settlements over the past month.

The militants launched this most recent attack on Tudu-Doka Avong along Kaduna-Kachia road, killing nine people and injuring several others. Confirming the incident, a community representative, Usman Stingo, said, “It happened at about 5:45 a.m. on Wednesday, June 3, 2020. The gunmen arrived [at] the village and started shooting sporadically.  They entered into some homes and burnt household stuff. The situation is very, very pathetic.”

Further confirming the attack, the Kaduna State Chairman of the Christian Association of Nigeria (CAN), Reverend Joseph Hayab, said, “Nine persons were killed, including women and children. The photos are not good to look at.  The mood in the entire Kajuru area is gloomy. People are living in fear.”

The CAN chairman further disclosed that some pastors were also affected in the recent attacks and are suffering in silence.  He, however, acknowledged good-spirited individuals who are assisting with food distributions to help the displaced, but lamented that the need is very large.  He expressed concern with the attitude of the government, saying, “The government seems to be living in pretense and looking away from the colossal impact of the attacks on the population.”

ICC’s Regional Manager for Africa, Nathan Johnson, stated, “Kajuru Local Government Area has now been attacked nearly a dozen times in the past month. Despite this, the government has not taken any clear or decisive steps to stop the violence. They have not caught any of the perpetrators, saved any lives, or assisted any of those who have suffered. This continued inaction is costing many people their lives, homes, and loved ones. It is time that the government in Nigeria is held accountable for the many lives that they have failed to defend. They are either completely incompetent and must be removed, or they are complicit and need to be thrown in jail.”