Update  2:30pm:  Bowing to international pressure from various human rights groups, the Sindh High Court has issued a temporary stay of their previous order, awaiting a new hearing scheduled for November 5. The 13-year-old girl has been placed into "protective" custody by authorities until then.

The Forced Child Marriages of Islam Are Undeniably Real

An estimated 1,000 Pakistani women and girls from religious minorities are abducted and forced into conversions and marriages each year. Pakistan's Islamic government and legal system typically supports this situation, often for religious (Islamic) reasons.

Western media, politicians, social justice warriors, and other apologists for Islam, often refuse to believe that child marriage, forced or otherwise, is a part of Islam or Sharia Law. These official court rulings prove otherwise. And the situation isn't limited to Pakistan, as similar court rulings have emerged from other Islamic countries, including Iran and Saudi Arabia.

Even in Western countries, child marriages are often accepted and even approved of within the Islamic community. For example, in 2013 an undercover reporter in the UK video-taped 18 Muslim Imams from various mosques around the UK agreeing to perform marriages between adult men and underage girls. The Imams were specifically told the girls did not consent to the marriages, yet they agreed to perform the marriages anyway. The Imams responded that the marriages were permissible under Sharia Law. One Imam said "If you force her to be willing, she will be willing." Experts on the situation in the UK estimate that about 250 forced marriages of underage girls take place each year within UK's Muslim community.

Yet, politically correct Westerners still refuse to believe the truth, despite ample evidence.

Sources: 1) Press release from International Christian Concern dated 10-29-2020. 2) Information from The Movement for Solidarity and Peace Pakistan, including their report, Forced Marriages and Forced Conversions in the Christian Community of Pakistan. 3) Information provided by the Gatestone Institute International Policy Council. 4) The UK documentary film "Forced to Marry," which first aired in 2013. 5) Article from the TROP website:  What does Islam teach about Forced Conversion. 6) Article from the TROP website: Sharia (Islamic Law). 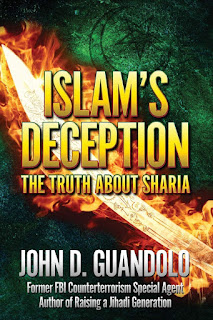 Ad:  Islam's Deception: The Truth About Sharia, by ohn D. Guandolo. Islam defines itself as a "complete system of life”—social, cultural, military, political, and religious—governed by sharia (Islamic Law). Following sharia is what it means to be a muslim. Submitting to Islam means submitting to Allah’s divine law—sharia. But, what exactly is sharia?