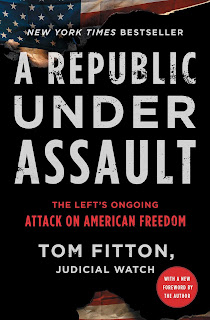 Here is the truth: The Biden administration is corrupt but weak. His party barely controls Congress. President Biden has a personal corruption problem, has obvious health challenges, must manage internal warfare between his party’s corrupt corporate wing and its rising Communists, and his moral claim on the presidency is rejected by a massive number of voters.

A Republic Under Assault is Fitton’s third New York Times bestselling book. His first two bestselling books, The Corruption Chronicles and Clean House, revealed what Judicial Watch, the largest watchdog agency in America, uncovered in its battles against Obama secrecy. A Republic Under Assault is a hard-hitting, fast-paced look at how the Radical Left and the Deep State tried to destroy the Trump presidency.
According to Fitton, The Left spent years targeting President Donald J. Trump–but anyone who believes in the U.S. Constitution, believes the United States must have clearly defined and protected borders, believes in the need for a strong military, believes in the value of hard work and faith, and believes in the rule of law and American exceptionalism could be next.
“This book reveals many secrets that the government and corrupt media tried to cover up,” said Judicial Watch President Tom Fitton. “In the book, readers will learn how the Left continues to assault our Republic on every front – from undermining election integrity, to illegal spying on Americans, to suppressing free speech, to destroying our borders and the rule of law.”
A Republic Under Assault debuted at #14 on the New York Times’s combined print and ebook list and spent two consecutive weeks on the NYT’s Hardcover Nonfiction list. The book also spent three consecutive weeks in the top three of Publishers Weekly’s Hardcover Nonfiction list and two weeks in the top five of USA Today’s list. Additionally, the book spent three consecutive weeks in the top three of the Wall Street Journal’s combine print/ebook nonfiction list and three consecutive weeks in the top three of the WSJ’s hardcover nonfiction list.
“When it comes to fighting for the American people’s ‘right to know,’ no one holds a candle to Tom Fitton and his team at Judicial Watch. A Republic Under Assault lays bare the condemning facts Judicial Watch continues to expose about ‘Obamagate,’ the Deep State’s seditious coup to bring down Donald Trump, and much more. This is must-reading for every American who wants to save our nation,” said Sean Hannity, #1 New York Times bestselling author of Live Free or Die.
----------------

>>>>> This website is affiliated with Amazon.com. As an Amazon Associate I earn from qualifying purchases. Purchases made through links to Amazon.com on this website help fund this website at no additional cost to you. Thank You for your support.
Posted by Tim Gamble