Spotting Antifa, FBI, and Other Infiltrators At Patriot Rallies and Protests 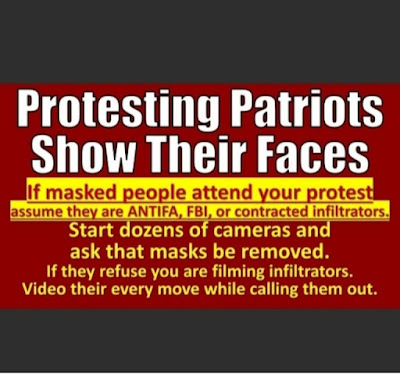 Protesting Patriots Show Their Faces
We have plenty of proof from the Tea Party Movement of a decade ago, to the more recent Trump rallies, to the Jan. 6, 2021 events, that the "other side" is more than willing to infiltrate conservative protests to spy, to instigate, and even to attempt false flag moments in order to disrupt and discredit conservative movements. Remember all those racist signs at Tea Party protests that the media showed over and over again? Every single one of them was later proven to be made and held by Democrats or other leftist operatives pretending to be Tea Party members. Similar things were happening at the Canadian trucker protests last month, and will happen at future protests.
True patriots exercising their constitutional rights to Free Speech and Free Assembly have no reason to hide their faces. Peaceful, non-violent protests are a 100% legal and morally acceptable way to raise awareness of issues and attempt to influence the political process. This is accepted by the media, politicians, and law enforcement when it is the Left protesting (even when those protests do include looting, rioting, and burning entire blocks). But whenever the Right does it (without the looting, rioting, and burning), protests are suddenly unacceptable and must be stopped at all costs - even if it means instigating or even creating the excuses to shut down right-wing protests.
Here are a few quick tips to spotting a potential infiltrator:
What to do if you think someone is an infiltrator? First, peacefully confront them about their behavior, signs, language, etc. Ask them to remove their facemask. Ask them to identify themselves. Notify protest leaders and organizers of a potential problem. Let other protestors know of the potential infiltrator. Take photos of them, especially ones without their face hidden. Take videos of their actions. Denounce them, their language, and their actions.
Most importantly, don't let them influence the group. Stick to your pre-planned activities. Don't go along with their ideas or theatrics.
----------------