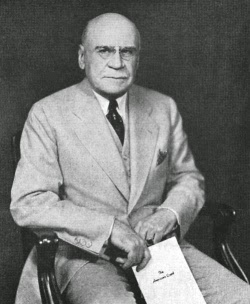 The American's Creed, written by William Tyler Page in 1917 as an entry into a patriotic contest to create a concise, but complete statement, of American political faith. Page's entry won, and was approved as a resolution of the United States House of Representatives on April 3, 1918.

The American's Creed is made up of individual lines from America's founding documents, and speeches by various statesmen.

I believe in
the United States of America as a  (1)
government of the people, by the people, for the people;  (2)
whose just powers are derived from the consent of the governed;  (3)
a democracy in a republic;  (4)
a sovereign Nation of many sovereign States;  (5)
a perfect union, one and inseparable;  (6)
established upon those principles of freedom, equality, justice, and humanity for which
American patriots sacrificed their lives and fortunes. (7)


Where Each Line Comes From:


Return to the main page of #HistoryHub.