The current Cold War with China, seen by many as just a Trade War (but in fact is much more), is only a prelude to what is coming. China is preparing for an inevitable "hot" war with America within the next 5 - 10 years. China is convinced this war must happen because of a concept known as The Thucydides Trap.  The Thucydides Trap isn't some conspiracy theory twaddle, but is a well-studied historical concept heavily discussed in academic and diplomatic circles. Very simply, the Thucydides Trap states that when a rising great power (China, in this instance) threatens to displace an existing great power (America), war that will likely lead to the destruction of one of those great powers is almost always inevitable. This has occurred in sixteen cases over the last 500 years, as revealed in the research of Harvard University professor Dr. Graham Allison.The Chinese are very aware of this concept, and are making policy based on it. It is the basis of their ongoing massive military build-up, as well as their interference in North Korea, pushing Kim Jong-un to stall in regards to denuclearization. It is also part of the reasoning behind their aggressiveness in the South China Sea (control over vital trade routes), and economic & diplomatic push into South America and Africa (the later which includes a growing military presence), in order to obtain various resources. 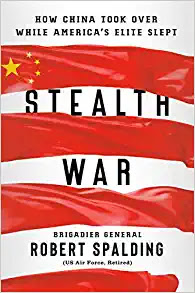 Ad:  In his book, Stealth War: How China Took Over While America's Elite Slept, Brig. Gen. Robert Spalding (USAF Ret.) exposes a decades long effort by China to successfully wage a six-front war on America's economy, military, diplomacy, technology, education, and infrastructure. A MUST READ to understand the the true extent of the threat we are facing from China.