11-11-2020 - Because the corporate media and Big Tech are trying to stop any talk of election fraud, despite ample evidence that election fraud was wide-spread and extensive, here is today's censored news: 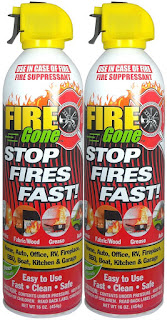 Ad: Max Professional Fire Gone Fire Suppressant Canisters. Easy-to-use fire protection for the home, office, garage, car, and workshop. Rated for Class A, B, and C fires. Smaller, lighter, and less expensive than traditional fire extinguishers, these are best used for smaller fires you may have in the kitchen, workshop, or even with your Christmas tree. I have several of these around my home.