With Rise of Far-Right Extremists, N.Y.P.D. Creates Special Unit (New York Times) - Sounds good. Violent extremists need to be stopped, regardless of their political or social ideology. The problem will be who defines "far-right," and how. At first, groups advocating violence will be so labeled, but these things have a way of being abused by politicians. How long before pro-life protesters, for example, are investigated for extremism because demonstrating against abortion is considered a form of intimidation and bullying, and thus "violent?" Or a ministry for being "anti-gay marriage." Or a hunting club because they have firearms? A slippery-slope which bears close watching.

"This Is The End Of The World For The Average Person..." (ZeroHedge) - This line from the article explains it all: "technology will continue to advance, and therefore, so will automation.  As this happens, the gap between the wealthy and the poor will increase as the middle class fades into nonexistence." Yep. We are on the cusp of an emerging dystopia, and technology will play a major role. Its part of the reason for my new Dystopian Survival website.

Liz Wheeler, host of Tipping Point on OANN, reports via her Twitter account:  "Btw the Black Israelites who shot up the Kosher deli yesterday in a targeted anti-Semitic massacre... are the same group name as the folks who harassed the Covington Catholic kids.  Just thought you should know since the MSM will never report that." 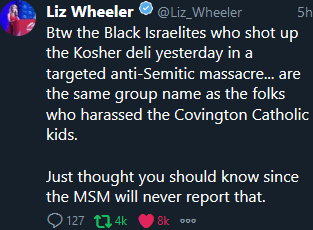 Record number of migrants arriving at U.S. border from terrorist-prone nations (OAN video via Whatfinger News) - This is why we need secure borders. We have a right and a duty to protect our people by knowing who is coming into our country, and stopping undesirables such as terrorists, human taffickers, drug cartels, and gang members from entering.

Germany: Left-wing extremists set fire to Leipzig tax office (Voice of Europe) - Despite what the tlking heads in the mainstream media say, it is the political LEFT which is much more prone to violence than the Right, both historically and in today's current climate.

Norwegian government awards Islamist group 100,000 euros to convert 100-year-old church into a mosque (Voice of Europe) - Europe is not only losing its Christian culture, it is in fact slowly becoming Islamic.

‘Hitler-worshipping Islamist’ migrant nearly kills Swedish teen during hours of brutal torture (Voice of Europe) - Its not much noted today due to political correctness, but there was a great deal of admiration for Nazi Germany and Adolph Hitler among muslims during and after World War II. Those ties exist today, as the ideology and hate spewed by both neo-Nazis and Islamic extremists are quite similar. Two peas in a pod.

New York: (Another) Muslim Immigrant Pleads Guilty to Providing Material Support to Terrorists (Creeping Sharia) - It will be largely ignored by the mainstream media, but yet another Muslim immigrant in the US is actively supporting terrorists.

As experts analyze North Korean missile engine test, some say Kim is done talking (American Militry News) - As the US continues to dance with North Korea over their nuclear and missle programs, its worth remembering that Kim and North Korea dance to the tune of China.